Losing Sight of What You Want

a Studio release
by The Dame 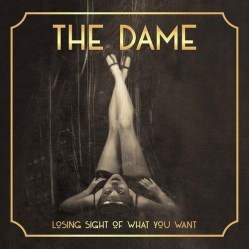 Dutch band The Dame has just put out an album called Losing Sight of What You Want. I would describe their music as melodic symphonic prog in a Marillion (circa Brave) sort of way, but this without even coming close to actually sounding like Marillion.

The album offers us seven tracks, most of them in the 5 to 7 minutes range but one lasts more than 11 minutes and the final one clocks at nearly 20 minutes. Even though the general mood of the album is melodic, the music does explore different genres, even flirting with metal prog at times. Lead singer Marian van Charante has a very nice voice that she never forces, but she does change its character and delivery to good effect depending of the ambiance. The album also includes quite a few instrumental parts that allow the musicians to show their chops.

I was very much impressed by The Dame. I am convinced that fans of bands like The Gathering, Mostly Autumn, Magenta, Gazpacho... will find much to enjoy with Losing Sight of What You Want, an album that can be compared in quality with what these well known bands have given us in the past.