a Studio release
by Stuckfish 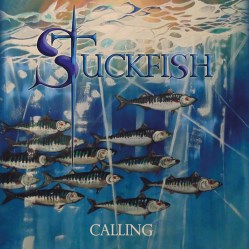 Stuckfish is the 2017 collaboration between two musician friends; singer-songwriter Philip Stuckey and guitarist/composer/producer, Adrian Fisher. Calling is their first album and consists of ten 4 to 6 minutes tracks that I would describe as melodic prog/rock/pop.

Lead singer Phillip Stuckey has a voice that is pretty much half way between Peter Nichols (IQ) and and Klaus Meine (Scorpions) and Stuckfish's music can also be compared to both these bands, although on the couple of rock ballads (i.e. ''The Man That I've Become'') the Scorpions influence is much stronger.

Adrian Fisher is an ace at creating different textures with his guitars and his soloing is always very tastefull. The main duo is well supported on keyboards, bass and drums by a trio of very talented guest musicians.

Calling is not an album that will redefine prog/pop, but it's an album I have enjoyed from beginning to end, and still take pleasure when I put it on for an other spin. This is more that I can say about a good number of albums that I've reviewed for ProGGnosis.

If you enjoy good uncomplicated Prog you can't do much better than Calling by Stuckfish.