a Studio release
by PuzzleWood 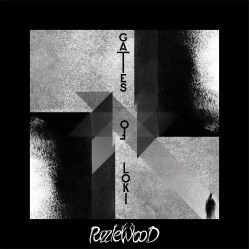 Gates Of Loki by Russian band PuzzleWood is a very nice discovery for me.

The album starts with a Floydian instrumental introduction and then shifts into two songs influenced by mid-nineties Porcupine Tree.These two songs really allow the listener to appreciate the great work of the rythm section (i.e. Nikita Lipatov on bass and Evgeny Semenov on drums). This being said, the real star of the show are Anton Legatov's guitars and singing. He is a virtuoso guitar player, offering different styles (from Allan Holdsworth to Jeff Beck with a lot in between) and often replaces the keyboards with his synthesized guitar sound. He is also an excellent singer (vocals are in English with only a slight accent), his voice not so far from Mikael Akerfeldt or even Bono at times.

After the Floydian/Porcupinish first part of the album, the musicians offer us a large pallette of musical styles. Three melodic songs separate a number of  intense tracks offering alternative rock (do I hear some Simple Minds?), metal prog (...hints of Tool), jazz fusion and even a little bit of blues rock. They do all this while always keeping some prog elements in their music and a mood link between the songs.

If PuzzleWood was a British, West European or North American band I'm sure that they would create quite a buzz in the prog community. Hopefully these talented musicans will find a large audience and continue to give us excellent music in the future.