Of Clans and Clones and Clowns

a Studio release
by Soul Enema 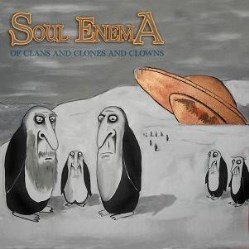 Of Clans and Clones and Clowns is my first contact with Soul Enema. After a couple of listens I decided to categorize them in the Symphonic Prog Metal genre, and the band that I felt they were closest to was Ayreon. When the time came to write my review of the album, I started reading about the band and album and what do you know? Arjen Lucassen played some guitar on one track.

As an album Of Clans and Clones and Clowns is mostly a very intense affair; symphonic, operatic and layered with many keyboard and guitar soloing. I guess about half the record is instrumental (although in fact there are not many instrumental tracks). For the rest, the lead singing duties go to the very powerful Noa Gruman, that has a voice pretty close to Niyet Tayeb, best known for her work with Steven Wilson.

Like I wrote before, Soul Enema's music kind of reminds me of Ayreon, but they do have their own colour, in part because of the Middle-Eastern elements sparkled in much of their music, and the distinctive singing of Noa Gruman that is, in good part, very intense. There are some quieter moments on Of Clans and Clones and Clowns (i.e. ''Last Days of Rome'' almost being a ballad and a few classical inspired piano moments can be heard) but the band mostly likes to crank up the intensity level. Soul Enema also adds touches of weirdness and humour to their music, something perhaps closer to Devin Townshend than Ayreon.

Performance wise this album is up there with the best. For fans of Symphonic Prog Metal, Of Clans and Clones and Clowns is a must have.