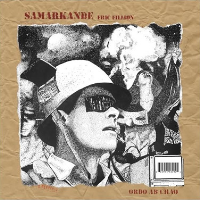 Ordo ab Chao by Samarkande is an instrumental album of electronic music with hints of progressive rock. A track by track review follows.
"Ordo ab Chao" : The first track that gave the album its name starts with an Alan Parsons I Robot type of intro but quickly evolves into something that would not be out of place on some Vangelis albums and perhaps even more, on mid-seventies Tangerine Dream records.
"Hotel Bilderberg" : Perhaps the most distinct peace on the album, very medieval sounding (with its harpsichord parts). Eric Filion really shows his keyboardist skills on this very melodic track. Hints of Anthony Phillips keyboard instrumentals and even at times Tony Banks can be acceptable references.
"TM-SW7905.1" and  "Digital Angel" : In my opinion these two pieces represent a multipart suite. The music is much more electronic than on the first two tracks. I get images of post-nuclear earth while listening to them. Hints of György Ligeti's "Atmosphères" used by Stanley Kubrick's 2001: A Space Odyssey also come to my mind. To a lesser extant Pink Folyd's "Echoes" and Genesis' "Silent Sorrow in Empty Boats" can be acceptable references". Intense, slightly nightmarish but also quite beautiful.
"Bohemian Avenue" returns us to a more melodic and tranquile mood while "La Sombre Noblesse" brings symphonic power à la Vangelis and then gently drifts into "Faction", "Hotel Bilderberg (Reprise)" and "Resistance" that end the album in a great final climax.
Ordo ab Chao is an album that does not pale compared to the great discs by electronic artists such as Tangerine Dream, Vangelis, Edgar Froese and their likes. The quality of the compositions, musicianship and production make Ordo ab Chao a "must have" for any fan of the genre.
Highly recommended!