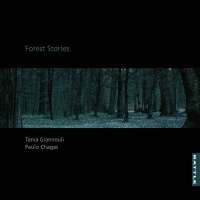 Listening to this album is like seeing music embodied. Some emotions are shown, other hidden. Complex thoughts and primal (minimal) instincts are revealed, and as the music morphs into an organic entity one can perceive its distinct blueprint. Like someone you know, you can like this music or not, but you cannot deny its soul.

The haunting piano sets the canvas on which the wind instruments add colors, sometimes bright and vivid, other times saturnine and morose. This music is very visual, like a series of paintings, and the overall impression is that of an artistic, maybe surrealistic, self-portrait.

So this was the 2 paragraph review I did at the request of the label, initially for promotional use by the label, but which ended up being framed in the booklet of the release, something that really made me proud when it came to my knowledge.

Anyway, and with the booklet in my hands and the album spinning in my player, I can only stand by my previous appreciation, and then adding something to it.

It is true that, music like the one presented in this album do not normally find its way to this site, as Forest Stories is an experimental, mostly avantgarde and set on atmospheric and improvisation elements. Yet, and in the continuation of an already long and fruitful friendship with Paulo Chagas (see my reviews on many other projects by this exquisite player, such as Miosotis, Mispel Bellyful and Zpoluras), and because when music is rich, textured and artistic there is no point in cutting it out just because it does not belong to a certain style, I just had to feature it here in Proggnosis, and develop a bit my initial review.

Forest Stories is a musical journey, mostly through introspective and atmospheric pastures, but always punctuated by difference and originality. The interplay between the two musicians is done in a, many times, bizarre way which seems as disconnected as wavering empathy. This fact, by itself, already demonstrates a strong personality and ensures a quality stamp, but the sheer emotions and states of mind, as well as the playing ability of the intervening musicians, end up taking the result to a whole new level...a level of their own.

There is plenty of contemplative moments here, as well as tense patters that transport the listener to very apart feelings and transmit different images. It is like wandering about in the forest, scanning its beauty but feeling crushed by its quietness and mysterious aura that can be so easily joyful as frightening.

In a more down to Earth analysis, and musically speaking, Tania  Giannouli sets her piano to sound as the basis to the different emotions, while Paulo explores all that gamut of vibes, moods and feels with his experimental and tremendously avantgarde approach.

In the end, this is really not for the average prog listener. One must like free form jazz with lots of experimental and improvisation moments in order to fully appreciate this release. Yet, and as aforementioned, good music does not (always) comes in standard format, and if you happen to like those artists that perceive music as a form of art and that are bold enough to express their most inner thoughts (magical dreams, frightening nightmares) in an uncanny way, then you should really give this excellent experiment of an album a chance.