A Life Within A Day 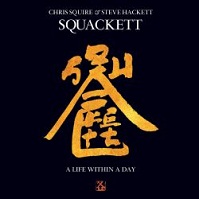 Deluxe Edition includes the CD above and a DVD in 5.1 Surround Sound mix contains the same tracks

When I heard that Steve Hackett and Chris Squire were teaming up for a CD project, I had mixed fealings. It was not the first time Hackett had worked with a Yes member. Remember GTR? the super group with Hackett and Steve Howe. A huge disappointment even when compared to Asia. Also, all of Chris Squire's projects outside of Yes (except for his excellent solo album from 1975) were average to mediocre in my opinion. But still one cannot stop himself from hoping. Thirty years ago this would have been a match made in heaven and Hackett has pretty much been on a roll for the last few years, with his last two CDs being very good.

So what is the verdict on A Life Within a Day? Well it is a very good album, but after a number of listens, for me, it really sounds like a Steve Hackett solo album. Sure, Chris Squire sings lead vocals on a couple of tracks and his bass playing can be heard all over the CD, but the music is typical of what SH has been putting out recently. His trademark guitar soloing and sound is on every track, his voice (even when he is doing backing vocals) totally dominates Squire's, the keyboards have a very symphonic but secondary role and the drums are of a John Bonham (heavy and slow) style that is found on most Hackett rock albums.

This being said, A life Within a Day is pretty much as good as Hackett's last two CDs, but perhaps a little too similar. Still, I've enjoyed it a lot since I got it, will keep on listening to it for while and will certainly revisit this CD in the future. A Life Within a Day should appeal to Steve Hackett fans and Prog lovers. Perhaps the band should have been called Shackett instead of Squackett, because there is much more Hackett than Squire in this collaboration.