a Studio release
by The Trio of Stridence 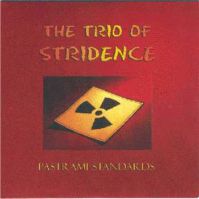 The Trio of Stridence is more a one off project than a set band per se. Coming from the fruition of a jam session, three musicians were set to take the chemistry of their like minded musician tastes and translate it into an official fusion release. And it's really a gem of a cd to be quite honest. Guitarist - Alex Masi, bass player - and drummer Paul Marangoni. Masi of late has really made some impressive strides as a legit fusion guitarist, moving away from the neo-classical shred guitarist he was known for back a decade or so ago. With is his work on MCM(Masi, Coven, Macaluso), and more recently his solo cd with drummer Macaluso, his sense for the original and honest freedom of fusion has proven he has the skills and imagination to be a full force on todays hard fusion scene. This cd is not an Alex Masi cd, yet easily could have been, The Trio of Stridence is of course a three piece guitar, bass, drums setup that delivers a dozen remakes of jazz/rock fusion standards.

Taking an approach of remaking some of the hard fusion classics, this trio tackles some Weather Report, Beck, Zappa, Mahavishnu, and even some King Crimson classics to round out the affair, so it's an all-instrumental guitar forward fusion fest, and the star of this show is obviously Masi, who not only has to imitate some of the finest guitarist of the golden age of fusion, but he does the keyboardists parts on his guitar as well. He has really blossomed into a classy fusion guitarist, worthy of doing these songs in a very respectable and formidable manner.

Not knowing too much about the supporting musicians, I do know that drummer Paul Marangoni had been in ex-Max Webster member Kim Mitchell's solo band in the 80's. He is an excellent all-around drummer, and perfectly compliments Masi's playing, he, like Masi, shows that having jazz and rock sensibilities as a musicians make for some very dynamic interplay, here Marangoni proves himself to be a drummer that we should be hearing a lot more of, never over playing, or limiting his sense for creative, on the fly inventive playing. What little I know of Marangoni, I know even less of the bassist - Allan, but understanding that while tackling some Pastorius, you better have some chops, and well he does. So here you have a trio of musicians that are playing some of the memorble fusion standards, all tastefully done, full of personal expression, and top notch musicianship. For those of you that enjoy the golden era of fusion, and great guitar, this is a perfect cd for you. 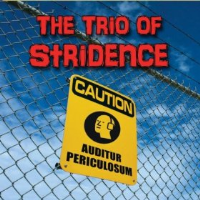