Eyewitness A Tribute To VDGG 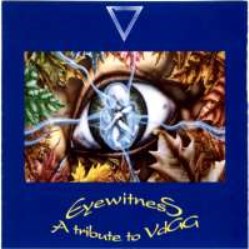 I like tribute albums - though they seem to rarely live up to the material or band that is the subject of the tribute. The potential for winning ranges from revitalizing an old song to adding new insight to either the words or music. The downside can result in a merciless brutalization of a given song.

Eyewitness - A Tribute to VDGG is an ambitious tribute to Peter Hammil and Van Der Graaf Generator and hits both sides up and down quite firmly.

When I ordered this album a couple of years ago I was very excited as I am a hugh mark for the music of Hammil/VDGG. I think that everyone ought to like this stuff - if only they could just get over the quirkyness of the music and peculiarities of Hammil's voicalizations. Alas not everyone can make themselves overlook such things and though VDGG/PH are influencial true greats in the world of prog - there was never any chance of the VDGG audience being wide (nor does it including many women).

What gets a high grade:

What gets a passing grade: These are songs that sound close to VDGG/HAMMIL or at least not appreciably worse:

What gets a failing grade and/or causes ear pain:


Hard to say if this album is worth your dime. I bought it before hearing it and it doesn't get much playtime. Some interesting songs but I would guess that there are not enough peaks for me to consider reacquiring it if my own copy disappeared.