a Studio release
by Musique Noise 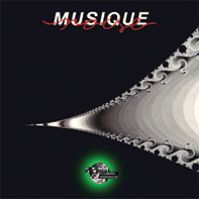 FGBG 4409.AR - 2002 Musea Records
Fulmines Integralis is the same album as the 1988 debut Fulmines Regularis however the the musicians decided to have added four unreleased recordings from 1992 originally planned for a second album.
That planned second album will never be released as the band split up in 1993.

Zeuhl is, by definition, a very adventurous, original, experimental and bizarre sub-genre of Progressive Rock.
With Magma and Eskaton in mind, Musique Noise embraces this style with ease and flavors it with their unique touch. The female vocals are used in a very uncommon way, sometimes seeming dispersed over the basing jazzing sections, other times drawing curve lines over a more “horizontal” musical texture.
There is an undisputable large amount of originality and experimental avant-gardism to be found in Fulmines Integralis. The band multiplies itself in instrumental frenzyness and odd time signatures, mixing operatic vocalizations with jazz, prog rock, classic tunes and other undefined styles. The result is obviously an amalgamation that is, at least, highly original.
I confess that I am not the biggest Zeuhl fan, so I am not one to fully appreciate this work, but I strongly believe that die hard fans of the genre will have a blast here.