a Studio release
by Balloon 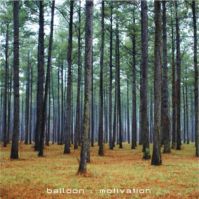 This is the band's self-released debut album.

Well, to be honest this band has chosen a name that, without listening to their music, does not ring that many bells and does not make you get that curious about it. But once you hit play with Motivation on the tray, you may just get in the mood and fully enjoy this first attempt by Dutch freshly arrived Balloon.

When All Yours starts to be unscripted by the speakers (and this is one of those tracks that deserve a boost in your volume) one is transported to a highly energy field that seems to cross Parallel or 90 Degrees and Orange Goblin fields in a blissful and graceful flight. But the band’s musical journey does not sit comfortably within those slight resemblances. Each track reveals a somehow new approach while maintaining a very cohesive rhythmic section (the driver of the power of the band). The guitar screams and moans in a sometimes heavy and other times spacey philosophy, but it also helps the psychedelic side that the keyboards try to impose. The guitar soloing sounds like a duality between experimentation and early 70’s hard psychedelic.
Now and then the band seems to find the path of Porcupine Tree, like in the closing track (It’s still today) where it really sounds like a demo track (a raw and almost minimal version) of some PT classic. But the row of curious developments does not end there. In Nowhere Ballon draws nearer a neo-prog version of some English mainstream pop outfit (think Pulp, The Verve or even Keane). In Unseen (the smallest track in the album, with its 5 minutes), the band gets alternative in a mid 80’s way like some sort of The Sound crossed with Peter Murphy with a more aggressive and fast pacing attitude and a metallic riffage and soloing.
Experimentation is something t hat the band tries in greater doses by the three final tracks of Motivation, amidst PT reminiscences in terms of the usage of calmer and more aggressive parts entwined with psychedelic passages.

Overall, this is a band and an album that has come as a very nice surprise. It is not perfect by any means but quite enjoyable for a car ride (I listen to it a lot in the morning when driving to work). I’ll be keeping an eye on these guys, that’s for sure.
Modern attitude musicality based on leanings that come as way back as the late 60’s, but done with personality and flair.