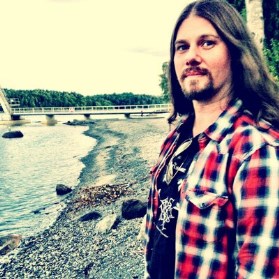 Telepath is a bit of a playground for Jacob Holm-Lupo when he is away from his main projects, White Willow and The Opium Cartel.

“The whole thing started during a lengthy visit from family this spring. Being a bit of an introvert I would have to sneak away from the festivities at night and seek refuge in my studio to catch a breath from all the socializing, and before I knew it three weeks had gone by and I had written, recorded and mixed an album. Telepath is basically a tribute to the music I grew up with, much like The Opium Cartel. But where The Opium Cartel mines the pop music I listened to in the 80s, Telepath goes a bit further back, to the hard rock and metal that was my very first musical love. A bit of thrash, a bit of doom, and a fair dash of 70s hard rock has gone into my cauldron of songs, and also more than a little of the kind of soundtrack music that accompanied the 80s horror flicks me and my friends used to love to watch (I still do!). So there’s that meeting of crunchy guitars and bangin’ drums with the synth sounds of Goblin, Fabio Frizzi and John Carpenter that basically defines Telepath. 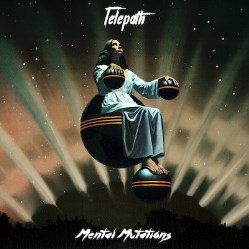