Cynosura formed in 2006 by Craig McConnell who, after moving from his home of 5 years in the US to Switzerland, made the acquaintance of Christian Sallin.

McConnell had a long histor of playing in UK based bands from 1967-96 making music in the styles of blues, rock, progressive rock and jazz-fusion. This followed with a period for McConnell as a composer of orchestral, modern ballet and film music.

Cynosura were a symphonic progressive outfit who released a single album - the release coming after McConnell's untimely death after suffering from ALS.

The name Cynosura is derived from Greek mythology. Cynosura, a nymph on Mount Ida raised the young Zeus who in gratitude for her services placed her in the heavens on the event of her passing. Cynosura thus became the North Star, also known as Polaris…

The band's release - 431 is tied to this name as it represents the distance in light years between earth and the star Cynosura. 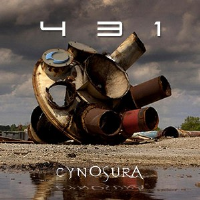